Smart Energy Europe: A 100% Renewable Energy Scenario for the EU28 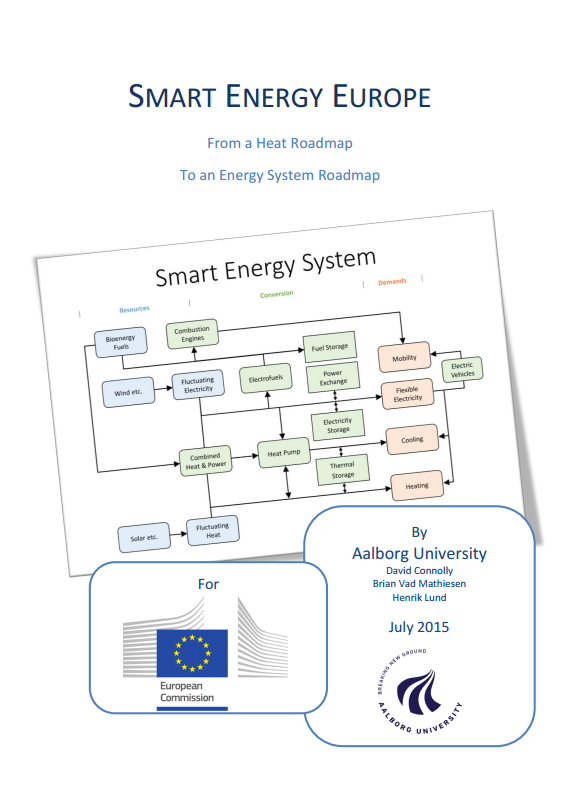 Here is a link to the final publications:

This study presents one scenario for a 100% renewable energy system in Europe by the year 2050. The transition from a business-as-usual situation in 2050, to a 100% renewable energy Europe is analysed in a series of steps. Each step reflects one major technological change. For each step, the impact is presented in terms of energy (primary energy supply), environment (carbon dioxide emissions), and economy (total annual socio-economic cost). The steps are ordered in terms of their scientific and political certainty as follows: decommissioning nuclear power, implementing a large amount of heat savings, converting the private car fleet to electricity, providing heat in rural areas with heat pumps, providing heat in urban areas with district heating, converting fuel in heavy-duty vehicles to synthetic fuel, and replacing natural gas with synthetic methane. The results indicate that by using the Smart Energy System approach, a 100% renewable energy system in Europe is technically possible without consuming an unsustainable amount of bioenergy. This is due to the additional flexibility that is created by connecting the electricity, heating, cooling, and transport sectors together, which enables an intermittent renewable penetration of over 80% in the electricity sector. The cost of the Smart Energy Europe scenario is approximately 10-15% higher than a business-as-usual scenario, but since the final scenario is based on local investments instead of imported fuels, it will create approximately 10 million additional direct jobs within the EU.