Link to the Journal Paper

Renewable-energy sources and energy efficiency are important elements in Danish Energy Policy. The implementation of wind power and combined heat- and power production (CHP) have already led to substantial fuel savings, and both technologies are intended for further expansion in the coming decade. Today, approximately 50% of both Danish electricity and heat demand are produced via CHP, and more than 15% of the electricity demands are produced by wind turbines. However, the electricity production from these technologies is linked to fluctuations either in wind or in heat demands rather than fluctuations in demand for electricity. Consequently, the electricity production exceeds the demand during certain periods and creates a problem of “surplus production”. This paper discusses and analyses different national strategies for solving this problem. 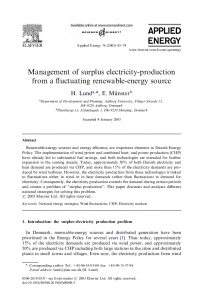