Link to the Journal Paper

High efficiency thermoelectric generators (TEG) can recover waste heat from both industrial and private sectors. Thus, the development and deployment of TEG may represent one of the main drives for technological change and fuel substitution. This paper will present an analysis of system efficiency related to the integration of TEG into thermal energy systems, especially Combined Heat and Power production (CHP). Representative implementations of installing TEG in CHP plants to utilize waste heat, wherein electricity can be generated in situ as a by-product, will be described to show advantageous configurations for combustion systems. The feasible deployment of TEG in various CHP plants will be examined in terms of heat source temperature range, influences on CHP power specification and thermal environment, as well as potential benefits. The overall conversion efficiency improvements and economic benefits, together with the environmental impact of this deployment, will then be estimated. By using the Danish thermal energy system as a paradigm, this paper will consider the TEG application to district heating systems and power plants through the EnergyPLAN model, which has been created to design suitable energy strategies for the integration of electricity production into the overall energy system. 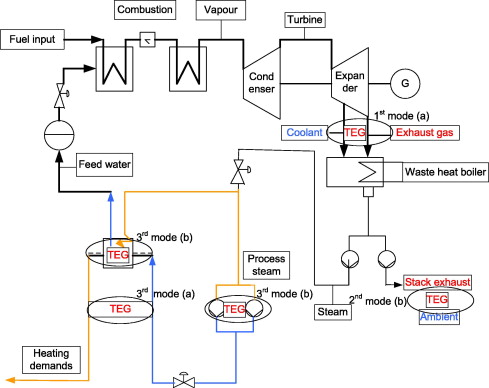